Interesting piece below, which stresses the idea of saving the manuscript 'For the Nation' which has been a dominant idea in this field for some time now. But how important is this when the rest of her manuscripts are "scattered around the world in libraries and private collections." and all of her papers are brilliantly collected online (http://www.janeausten.ac.uk)? Especially with the work that has gone into the online versions where "Each manuscript can be opened in a variety of ways: as facsimile pages which can be magnified using ‘zoomify’; as transcribed text set side by side with the original manuscript page; or through a Headnote that provides details of the manuscript’s history and physical description. ".
So this recent sale which cost "in excess of 1 million pounds" reopens questions such as what is the value of examining the original vs the excellent online version? Who will have access? And what does the acquisition mean for scholarship? etc.


*
Article by the Bodleian below:
"The Bodleian Libraries have acquired at auction the autograph draft manuscript of Jane Austen’s unfinished novel The Watsons. The last major Austen manuscript to have been in private hands, The Watsons is the most significant Austen item to have come to the market in over twenty years.
The acquisition which cost in excess of £1 million was made possible with a substantial grant (£894,700) from the National Heritage Memorial Fund (NHMF). Other generous funders are the Friends of the National Libraries, the Friends of the Bodleian, Jane Austen's House Museum (Jane Austen Memorial Trust) as well as other supporters.

Richard Ovenden, Deputy Librarian, Bodleian Libraries said: ‘The Bodleian Libraries are delighted to have succeeded in their bid to save Jane Austen’s draft manuscript of the The Watsons for the nation.  The manuscript is such a valuable part of our literary heritage and we are glad it will stay now in Britain. We will make the manuscript available to the general public who can come and see it as early as this autumn when The Watsons will indeed be a star item in our forthcoming exhibition Treasures of the Bodleian. Our thanks go to all our supporters for their enormous generosity in supporting this purchase and in recognising the importance of keeping this priceless manuscript in a British institution.’
Carole Souter, Chief Executive of the NHMF, said:  ‘This was an unprecedented opportunity to acquire the earliest surviving original draft of a novel by one of our greatest and most popular writers. It is fitting that NHMF, the fund of last resort for our national heritage, could step in – in the face of intense, worldwide competition - to help keep this exceptional work for display and scholarship in the UK.’
The Watsons is Jane Austen’s first extant draft of a novel in process of development and one of the earliest examples of an English novel to survive in its formative state. Only seven manuscripts of fiction by Austen are known to survive. The Watsons manuscript is extensively revised and corrected throughout, with crossings out and interlinear additions. It is a testimony of Jane Austen’s efforts to give shape to the earliest ideas as they pour onto paper, as she reviews, revises, deletes and underscores. The Watsons is the very genesis of fiction from one of the Britain’s greatest and best-loved writers.
The Bodleian Library already holds her Volume the First, a manuscript of Austen’s juvenilia. The University of Oxford leads research in Jane Austen and it has recently launched a digital resource The Jane Austen’s Fiction Manuscripts Digital Edition (www.janeausten.ac.uk) which reunites in a virtual space all Jane Austen’s handwritten manuscripts for the first time since 1845 when her sister Cassandra dispersed the collection.  "
Posted by Carrie Smith at 12:07 No comments:

"Lost tales of a Hebridean Atlantis, magical water horses, and Robert Burns’ murderous ancestors have been uncovered in a major study of Scotland’s foremost Victorian folklorist that has been funded by the Arts and Humanities Research Council (AHRC). 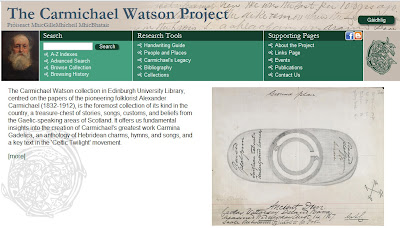 For the first time the notebooks of Alexander Carmichael, a man compared to Germany’s Brothers Grimm, have been transcribed, catalogued, indexed and imaged. They have been made available online by the University of Edinburgh’s Special Collections.
The publication is the third part of the Carmichael Watson Project, a decade-long project to unlock one of the world's major folklore resources.
Working as a tax collector on Lewis, Argyll, Uist and the West Highlands from 1860, Carmichael spent 50 years collecting legends, songs, curses, charms, prayers, and oral history from Gaelic-speakers. In total Carmichael spoke to more than 400 individuals, filling 28 notebooks full of tales. He recorded the names, ages, occupations and locations of almost everyone he met.
Carmichael used his notes for his masterwork, Carmina Gadelica. Published in 1900 it was a seminal work within the Celtic Twilight movement of the time. Yet it is estimated that only a tenth of the work collected made it into the book.
The AHRC award has allowed researchers and archivists to spend two years deciphering and transcribing Carmichael’s notoriously bad handwriting. They have uncovered hundreds of unpublished stories including tales of the Green Island, the Hebridean version of the Atlantis myth, the giant Finn McCool, and magical water horses.
One historical account records a new date for the last sighting of the Great Auk, a now extinct, oversized bird that resembled a penguin. Reputedly last seen in Iceland in 1844, Carmichael records the sighting of one in St Kilda four years later. It met its demise when islanders believed it was possessed by a demon and beat it to death.
Dr Donald William Stewart, senior researcher for the Carmichael Watson Project, said: “For over fifty years, Alexander Carmichael tirelessly, even obsessively, recorded the culture, lore, and beliefs of his native Scottish Highlands. By the end of his life in 1912, he was both Celtic guru and folklore jukebox, the internationally-recognised authority on Scottish Gaelic songs, stories, traditions, and beliefs. Carmichael’s voluminous papers, now preserved in Edinburgh University Library, form one of the foremost folklore collections in the world.”
Users of the new resource will also be able to search the catalogue for names of individuals who shared stories, or were mentioned in tales. For example, individuals who trace their family tree to Uist can search for mentions of their ancestors within Carmichael’s notebooks.
The website (www.carmichaelwatson.lib.ed.ac.uk) was launched in conjunction with a two-day conference 'Alexander Carmichael: Collecting, Controversy and Contexts' and an exhibition, ‘Unlocking the Celtic Collector’, is running in the University Library until 22 July."
Posted by Carrie Smith at 15:58 No comments: 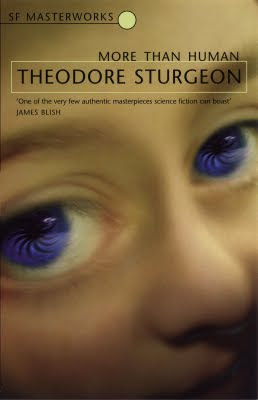 ‘The University of Kansas will be hoping Theodore Sturgeon's famous maxim that "90 per cent of everything is crap" does not apply to his own work after the papers of the legendary science fiction author were donated to its library.

The collection donated to the University of Kansas by his family is valued at $600,000 (£375,000), and includes the original manuscript of his most famous novel More Than Human, his notes for a Star Trek episode and his correspondence with fellow authors, from Isaac Asimov to Robert Heinlein and Harlan Ellison, in which Sturgeon shared story ideas and drafts with his contemporaries….’

Full text of article by Alison Flood from the Guardian website.

Dr Carrie Smith (@CarrieRSmith) is a Lecturer in English Literature at the University of Cardiff. Carrie's research focuses upon Ted Hughes, composition and poetic process.