Dickens Exhibit at the British Library 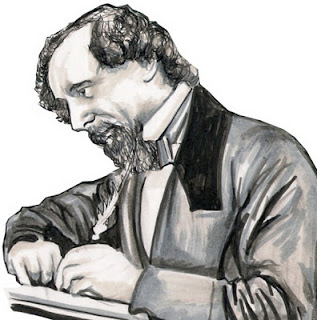 The British Library currently has a free exhibition on Charles Dickens as part of the Dickens 2012 celebrations—which you’ve probably noticed merrily swamping the BBC over Christmas, with a pretty good adaptation of Great Expectations and a number of documentaries fromArmando Iannucci’s views on Dickens’ style to Sue Perkin’s wonderful programme about the long suffering and overlooked Mrs Dickens.

The British Library exhibit , titled ‘Charles Dickens and the Supernatural’, focuses on Dickens’ exploration of and relationship with supernatural phenomenon in his works, correspondence and writing, and showcases a number of prints, first editions, copies of the Victorian periodicals over which Dickens presided such as Household Wordsand All the Year Round, and original letters and illustrations from his works.

The exhibit space is fairly small in the Folio Society Gallery, but well worth a look if you’re around the BL, particularly for its display of the marvellously sensationalist penny magazines of Dickens youth, such as The Terrific Register, which covered everything from ghouls and ghosts to cannibalism and incest.

I also caught the Illuminated Manuscripts [not free] exhibition while there-- ‘Royal Manuscripts: The Genius of Illumination’-- beautiful and fascinating, especially one illustrated pilgrimage map, much like a medieval religious pop-up book, made into an interactive digital display enabling the viewing to chart the root through each intricate illustration and direction. Wonderful: http://www.bl.uk/whatson/exhibitions/royalman/about/index.html

Dr Carrie Smith (@CarrieRSmith) is a Lecturer in English Literature at the University of Cardiff. Carrie's research focuses upon Ted Hughes, composition and poetic process.